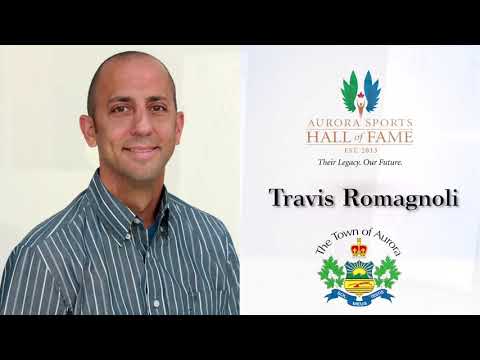 Travis Lawrence Romagnoli was born in Newmarket, Ontario on June 2, 1976. From a young age, Travis showed tremendous talent as a multi-sport athlete. He loved hockey and played for the Aurora Minor Hockey Association where he was appointed Captain of both the Novice and Atom A Rep teams. In 1988, he received the prestigious “Player of the Game” award during the Major Atom Tournament. Hockey was not the only sport that Travis gravitated toward; he swam competitively as a member of the Aurora Swim Club and played minor rep soccer with the Aurora Youth Soccer Club.

In 1986, Travis further expanded his athleticism when he turned to gymnastics as an off-season conditioning activity for hockey. He was immediately hooked. For two years, he juggled both hockey and gymnastics until it became too demanding. It was clear that he had a choice to make, and he decided to concentrate on gymnastics, unsure where it would lead him.
After deciding to focus exclusively on gymnastics, Travis saw near immediate success; at the 1989 Tyro National Championships, he won Gold All-Around, setting the record for highest score earning 111.5 out of a possible 120 points. That same year, he won the Town of Aurora Civic Award for his outstanding achievements. In 1990, Travis competed at the Junior Pan Am Games and won gold in Pommel Horse and bronze in Floor, Rings and All-Around.

From 1991 to 1993, Travis trained at TN Academy in Concord under Coach Masaki Naosaki and Coach Hiroshi Shimosaki. Multiple clubs trained within the same facility and the overlap meant that Travis received guidance from a variety of talented coaches including Coach Takashi Kobayashi who was coaching for the University of Toronto. During this time Travis was an avid competitor; some highlights include the 1991 Junior National Championships where he was awarded Bronze All-Around, and the 1992 Junior Pan Am Games where he won gold in Parallel Bars, silver in Horizontal Bar and Vault, and bronze All-Around.

In 1994, Travis began training with Vaughan Gymnastics and continued to work with Coach Shimosaki. That same year, he was a member of the men’s team that won gold at the Commonwealth Games for Artistic Gymnastics. In 1995, Travis competed in the Subway World Gymnastic Challenge and won silver in Horizontal Bar and, later that year, won bronze in Team Competition at the Pan Am Games.

“Be patient. That was something I didn’t have as a youngster was patience. Don’t take things too seriously. Luck happens; you just have to be ready for it.”
– Travis Romagnoli

While at the University of Illinois, Travis competed regularly at the National Collegiate Athletic Association (NCAA) Championships and had 3 third place finishes, 3 second place finishes, and was a two-time National Champion in a variety of events, including Vault, All-Around, Parallel Bars, Horizontal Bar, and Team Competition.

In 1998, the University of Illinois men’s gymnastics team came together surprising everyone when they won bronze for Team Competition. In 2000, Travis was awarded the big 10 Medal of Honour, one of the highest awards in American college athletics, that is given to a student athlete who excels both academically and athletically. As a student on a full scholarship, Travis felt a supreme responsibility to be a good athlete and a good student. This honour acknowledged Travis’ ongoing commitment to both academic and athletic excellence. In 2005, Travis married Gena, fellow University of Illinois gymnast, and together they have three children Celia, Vivian and Max.

In recognition of his excellence in Gymnastics, we are proud to welcome Travis Lawrence Romagnoli as part of the 2019 inductees into the Aurora Sports Hall of Fame.