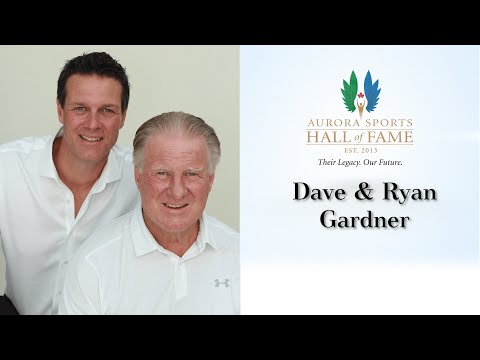 David “Dave” Calvin Gardner and Ryan Robert Gardner, follow in the footsteps of Cal Gardner – their father and grandfather respectively. The three generations have left their mark on the sport of Ice Hockey, both nationally and internationally.

Cal Gardner, a hockey legend in his own right, played for the Toronto Maple Leafs, winning the Stanley Cup twice. His son, Dave Gardner, was born in Toronto on August 23, 1952. From an early age, it was obvious that Dave would follow in his father, Cal’s, footsteps. He grew up playing minor hockey in Leeside and in 1970 he was drafted to the OHA by the Peterborough Pete’s. Dave quickly moved to the Toronto Marlboros where he had an outstanding rookie season scoring 137 points in 62 games. That year he was the recipient of the Red Tilson Trophy, awarded annually to the most outstanding player in the league.

Dave’s professional hockey career began in 1972 when he was drafted 8th overall to the Montreal Canadians. He was then traded to the St. Louis Blues where he played 23 games and scored 9 points. Midway through the 1974-75 season, Dave was traded to the California Golden Seals (who later became the Cleveland Barons) where he played 289 games and scored 166 points. During his time with the club, Dave had four consecutive seasons where he scored at least 16 goals per season. While in the NHL, Dave played 348 games and scored a total of 188 points.

In 1980, Dave accepted an offer to play in Europe with the Swiss 2nd division Ambri Piotta hockey team, beginning a new chapter in his professional hockey career. The arena that Dave played in was at the foot of a mountain, and the roof was open halfway to prevent any damages from avalanches. While playing in Europe from 1980 to 1988 for both the Swiss-A team, Ambri-Piotta and the Swiss-B team (VISP) Dave played 255 games and scored a total of 641 points.

“If you’re going to play then give it your all.”
– Dave Gardner

David’s son, Ryan Gardner, was born in Akron, Ohio on April 18, 1978, while his dad was playing in the NHL for the Cleveland Barons. One of Ryan’s first memories of hockey is watching his dad play in the Swiss arena at the foot of the mountain. He was inspired by both his father and grandfather’s hockey career and decided to continue the family legacy. He began playing minor hockey in Switzerland, and when his family moved back to Canada, he continued playing in Aurora as a student of Cardinal Carter Catholic School, and with the Greater Toronto Hockey League. In 1995, Ryan was drafted into the OHL by the London Knights. He played with them for two seasons before being traded to the North Bay Centennials where he played two more seasons.

In 1998, Ryan left home at the age of nineteen to live in Switzerland and play with the Ambri-Piotta Under 20 in the Elite Junior A. League. He quickly learned how to take care of himself; his only contact with home was a weekly collect call from a payphone. From 2004-2007, Ryan was a member of Team Canada, and when he was not playing for the Swiss NLA teams, he competed with Team Canada for the Deutschland, Hungarian, Spengler and Loto Cups. Ryan officially became a citizen of Switzerland in 2008, and was then able to play for the National Swiss team. As a member of that team, he brought home a silver medal at the 2013 Ice Hockey World Championships. The following year he competed with Team Switzerland at the Sochi Winter Olympics. In 2015, while playing for SC Bern A, Ryan and his team won the Swiss Cup.

“I found inspiration in my teammates who every day showed me the meaning of being a professional, both on and off the ice.”
– Ryan Gardner

During his 20-year career in the Swiss A League, Ryan scored 798 points in 1057 games, winning multiple championships, including: four league titles, the Champions Hockey League, two Continental Cups, the Super Cup, Victoria Cup and the Swiss Cup. He made two league All-star teams and scored the most points in the playoffs – twice.

Of course, none of Ryan and Dave’s accomplishments would be possible without the help of both their family members who provided incredible support behind the scenes. In recognition of their athleticism and contributions to the sport of Ice Hockey, we are proud to welcome David Calvin Gardner and Ryan Robert Gardner, as part of the 2019 class of inductees into the Aurora Sports Hall of Fame