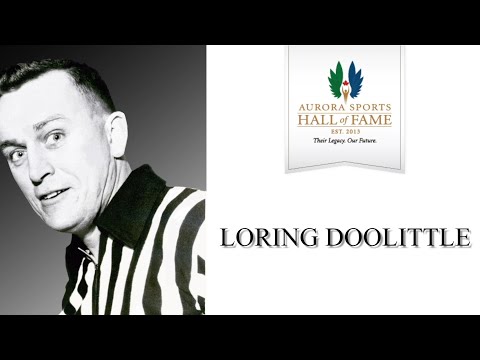 Loring Doolittle, known affectionately as “Dooey,” was born in 1928 in Aurora. He grew up in a large family with three brothers and three sisters in the family home on Catherine Ave. Loring excelled at several sports from a young age. He played hockey, lacrosse, and baseball for local teams in Aurora, Newmarket, Maple, and King City. His mother and father attended every local game. His younger siblings looked up to him as a hero.

Loring did not like school. He left for good in grade 8 to work at the Sisman Shoe Factory. Loring also had a stutter. In school a teacher ridiculed him telling him he should be quiet until he learned to talk. Later in life as a referee, however, he had no difficulty talking to an audience of several thousand spectators. Despite his dislike of school, he looked up to the school’s principal Dell Babcock. The principal, who also coached hockey, liked Loring and the two had a lifelong friendship.

Loring and older brother Gar were very close in both age and ability. The brothers played baseball for both Aurora and Newmarket over the years. At that time, the winning team would pick two of the best players from the defeated local team before going to the Ontario finals. Gar and Loring were often chosen and played together. The two brothers were also chosen to tryout for the pro-ball team in Toronto which was at that time called the Toronto Maple Leafs. Years later Gar joined the Royal Canadian Air Force (RCAF) and passed away soon afterwards due to an operation in 1946. His brother’s death struck Loring very hard.

“He was a really rugged hockey player the year after Gar died…took his frustration out on the ice” – Loring’s brother Claire Doolittle Loring too was involved with the RCAF. He was not a soldier, but played hockey for them. The RCAF commander wanted a winning team and recruited Loring who was a “gun for hire.” With the team Loring traveled the country playing at Air Force bases around Winnipeg, Montreal, and other cities. He played for one season winning the Challenge Cup with them.

By 1952 Loring’s true passion, baseball, was in his sights. Deciding he was never going to make a living playing baseball in Canada, he moved to the United States. It was there that he attended Bill McGowan School for Umpires in Florida. After graduation he umpired Single A Ball in the States for a couple of years. When the season was over he would always return to Aurora and go back to his labouring job at the Tannery. It eventually came to his mind that he could referee hockey when home in Aurora. Loring had connections at St. Andrews College and knew they were looking for a hockey referee. He joined St. Andrew’s refereeing their games against Upper Canada College. Loring remained on until moving to the Ontario Hockey Association at age 31 where he stayed for six years. He quickly rose though the ranks to referee senior hockey in Ontario and refereed an Allen Cup game.

In the mid-1960s Loring took the next step and began referring for the NHL. The league sent him around cities of the North East refereeing games of the Original Six. After the NHL expansion in 1967, the league sent him to California to referee games of the western league. Throughout this time, Loring would regularly return to Aurora and attend local hockey events. He also returned for the retirement party of Dell Babcock, the principal who influenced him at a young age. To Loring, Aurora was always home and a place where he was comfortable.

For his strong local spirit and refereeing around the continent we are proud to welcome Loring Doolittle to the Aurora Sports Hall of Fame.