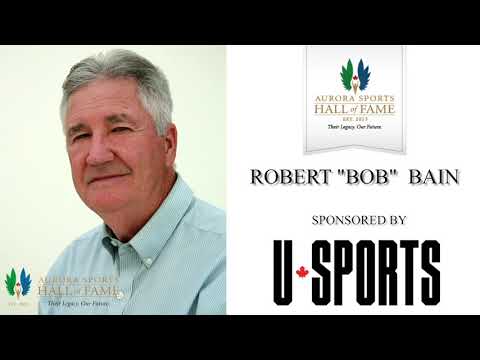 Bob Bain was born in 1947 in Niagara Falls Ontario. His father was a basketball coach on an RCAF training base, which is where his parents met. In his youth he played baseball, hockey, and football. In junior hockey he played with future pro hockey player Derick Sanderson. But of all the sports he tried he exceled in basketball. Bob played basketball for his high school team at Stamford Collegiate for several years. His coach there encouraged him to continue his education to the university level, which he did.

Bob attended Waterloo Lutheran University (now Laurier University) and played on their basketball team the Golden Hawks. Bob and the team made the national championships three times and won it finally in 1968. After gaining his degree in psychology he moved on to the University of Alberta where he earned a Bachelor’s and then a Master’s in physical education. As a graduate student coaching was now open to him. His first chance came in 1972 when the team’s junior varsity coach took a year off. Bob became coach of the Golden Bears and that season led his team to victory in the Canada West Playoffs.

Bob was offered a position at a brand-new physical education program and began as a lecturer at York University in 1973. Within a week he moved up to coach of the basketball team. Before this promotion Bob had considered more education, but never went back because he loved to coach so much. He eventually gained tenure at York and taught in the coaching certificate program. In his career at York, Bob led the Yeomen to over 700 victories and made the national championships eight times winning bronze in 1978 and 1979. Under coach Bain the team made 11 Ontario University Athletics (OUA) east division first-place finishes and won 6 OUA conference championship banners. Retiring in 2011 from a 38-year career Bob became the longest serving coach in the university’s history. His team made the playoffs 35 of those years.

Bob cared deeply about his players and has remained friends with many past students. He encouraged them in learning, sport, and in life skills. In his time, he coached 14 Canadian Interuniversity Sport (CIS) All-Canadians, 80 OUA All-Stars, and 5 York athletes of the year. He helped develop the National Coaching Certification Program, helping to write levels 1, 2, and 3. He has trained more three-level coaches than anyone else in Canada.

“I realised that I could teach so much through the milieu of sport” -Bob Bain Bob has been twice named CIS national coach of the year and is a 9-time OUA East coach of the year recipient. In 2010 he was inducted into the Ontario Basketball Hall of Fame. In 2012 Bob was awarded the John McManus Award for lifetime achievement in coaching and, in 2016 he was inducted into York University’s Sports Hall of Fame.

For his lifelong devotion and nationwide impact on coaching we are proud to induct coach Bob Bain into the Aurora Sports Hall of Fame.