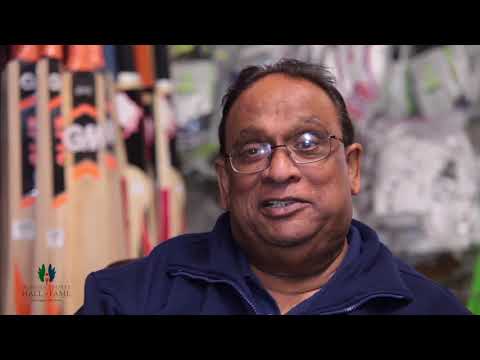 William James Fleury was born in 1865, the youngest child of Aurora Implement manufacturer, Joseph Fleury, and his wife Ann Hughes. He was known as Will or Billie to family and friends.

He lost his mother at the age of six, and his father at 15, but he grew up under the watchful eye of his stepmother, Sarah, and developed into a young man of exceptional talent. In 1881, the first report of him playing in a cricket match in a local game was recorded. He was sixteen. He was already good at it. An Aurora side played against the fashionable western Toronto suburb of Parkdale on the Aurora Oval. Will batted 27 runs for Aurora in a home-side victory.

In 1867 Prime Minister Sir John A. Macdonald declared Cricket “Canada’s National Sport.” It was that popular. It was played by amateur sportsmen all over the young Dominion of Canada from mid-May until October. Although it was considered a gentleman’s game, every town had its cricket ground and its team, schools, even factories had sides, and local papers enthusiastically reported the week end’s scores.

Fleury played for many clubs between 1881 and 1887; Aurora, Newmarket, Osgoode Hall, the Toronto Cricket Club, the Royal Canadian Yacht Club, Rosedale and many more. George Barber, the acknowledged father of Cricket in Canada, founded the Toronto Cricket Club in 1827, and further introduced cricket to the town of York while a master at Upper Canada College. U.C.C. was where Will was sent to complete his High School education, and where he would solidify friendships in the cricket world that would remain with him throughout his life.

At age 22, he was selected by George Lindsey of the T.C.C. to be one of twelve members of The Gentlemen of Canada, assembled to tour the UK during the summer of 1887, the Jubilee Year of Queen Victoria’s reign. Fleury acquitted himself well throughout the tour. His teammates nicknamed him “The Rustic,” a friendly reference to his rural roots. One of the highlights of the tour was a match in Cheshire, in which the Canadians met and played against the great Dr. W.G. Grace. Grace is considered among the very few truly legendary players of his era, and several of the Canadians had seen him play in Canada as young lads.

While a student at Osgoode Hall and as a young barrister, Fleury continued to play regularly in Canada and the US. During the summer tour of the Gentleman of Ireland, Fleury played against the touring Irishmen as part of the “all North” players in Orillia, Ontario, on August 27th, 1888. Fleury batted 20 runs in for the All North and recorded two outs as a bowler. As part of the Gentlemen of Canada, Fleury played on August 30th and September 1st against the Gentlemen of Ireland at the home of the Toronto Cricket Club, the Caer Howell ground in Toronto.

Fleury was an all-rounder. It was rare for a player to bat, bowl and field with equal skill. He was a left handed batsman, whose slow right-handed bowling was a well-known weapon, which the British Press once described colourfully as “mystifying his opponents.” He was a canny, swift fielder, and he had a good arm. As a batsman, he recorded at least two “Centuries” (over 100 runs in a single at-bat) and on another occasion came to within a single run of a third Century. Will scored 103 runs, not out, against a Québec side, and was awarded the Silver Trophy Badge by the Ontario Cricket Association in August, 1890.

At the ripe age of 39 Fleury will still playing Cricket. In a 1904 contest between the Toronto Cricket Club and Ridley College he opened the batting with 44 runs, and bowled a few overs in the same game.
William Fleury was a skilled utility player, with a superior knowledge of the game, and he was highly respected by his peers, which led to his nomination to captain the Canadian XI in 1908 (U.S. Tour) and 1910 (U.K Tour). During the highly successful tour he led to England in 1910 the Canadians bested several seasoned sides of experienced players, and the English press gave them solid reviews.

As a member of the Gentlemen of Canada in 1887 and 1888, Fleury played a significant part in restoring Canada’s good name. The team carried national support and pride with it to England, taking the Canadian game to the heart of Cricket, the hallowed ground of the Oval at Lord’s in St. John’s Wood, London, which in Will’s day held 28,000 spectators. During the 1910 tour, Fleury, aged 45, captained, managed and coached the team, called the Canadian Zingari.

The tours in which W. J. Fleury participated ran in stark contrast to the first tour of Canadian cricket players the young Dominion sent abroad to the Continent. During the abbreviated 1880 tour, the Canadian players were badly outmatched and outclassed, the Canadian captain was arrested mid-way through the tour as a deserter from the British Army, and despite heroic efforts to revive it, the tour collapsed.

In 1887, the Canadians had much to overcome, and the tour was a triumph. By 1910 the Canadians had proved themselves on the world stage, the British press pronounced them of a caliber equal to the best in the world, and mused about the possibility of a Canadian-British test match. Although that was never to be, W. J. Fleury himself could take personal pride in that success. He was part of it.

W. J. Fleury died in 1946. Recognizing his dedication and leadership and his life-long passion, for the sport of Cricket, while representing both Aurora and Canada, we are proud to welcome William James Fleury as the first cricket player to be inducted into the Aurora Sports Hall of Fame.