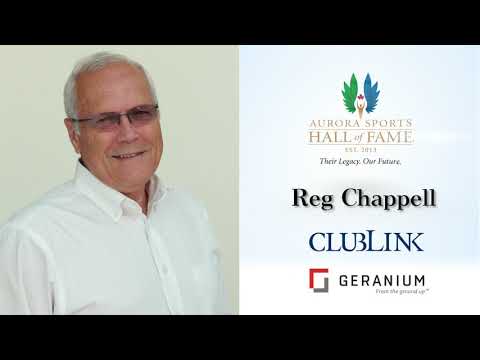 Reginald “Reg” Chappell was born in Windsor on August 26, 1947. To say that he was drawn to the water from a young age would be an understatement; when he was three years old, he had to be tied to a picnic table because he refused to stay out of the deep water! One of Reg’s earliest memories is pretending to swim in the backseat of the car while his dad was driving. He would pretend to dive and propel though the ditches and culverts as the car drove by. All Reg wanted to do was be in the water, but the family could not afford swimming lesson until he was twelve years old.

In 1962, when he was in grade nine, Reg was asked to coach the Herman Collegiate Institute High School dive team. This was the beginning of his coaching career and he continued to coach the high school dive team through university. Reg also joined the high school swim team and his coach, Keith Buckley, inspired, motivated and guided him both athletically and academically. In 1966, the swim team won the High School Championship and Reg shared the Individual Senior Championship award with a fellow teammate.

When Coach Buckley left the school, Reg felt the absence of his positive influence both on the deck and in the classroom. He went on to fail grade twelve twice, and found a job at a local factory where he worked for four years while completing high school through correspondence courses. In 1969, after the passing of his mother, Reg fulfilled her wishes for him to return to school and entered the Kinesiology program at the University of Windsor. Despite his academic struggles, the university swim coach, Ron Schlegal convinced Reg that he had what it took to graduate. In 1972, Reg reached the finals of the Ontario University Athletic Association Swimming Championships and later graduated with a Bachelor of Arts.

“Coaches make a difference, and because of them, I have always paid it forward.”
– Reg Chappell

In 1970, the newly formed Windsor Aquatic Club hired Reg as their first Head Coach. From 1973 – 1986, Reg went on to work for the Mississauga Aquatic Club, Peterborough Y Swim Club, and the Newmarket Stingrays. He was an active member of the committee that was tasked with designing a new National Coaching Certification Program and was a program advisor and Master Course Conductor for the ESSO Swim Canada Awards. For fourteen years, he served as the secretary of the Ontario Swim Coaches Association.

In 1986, Reg married Carol and stepped down from coaching to pursue a new career as a financial advisor. Together, Reg and Carol have three children; Christine, Jason and Brett, and 2 grandchildren; Andrew and Emma. It was no surprise that Reg could not stay away from the pool and in 1993, he started his own club, The Aurora Swim Club, now known as Ducks Swimming. It turns out Reg had a knack for founding clubs and would go on to found the Master Ducks in 1995, the Stouffville Swim Club and Stouffville Masters, both founded in 2001.

In 2011, Summer Mortimer asked Reg to coach her to the 2012 London Paralympics Games. Under his guidance, Summer set three world and five Canadian Para records and won two gold, one silver and one bronze Paralympic medals. Following the 2012 Paralympic Games, Reg was asked to coach Nydia Langill at several national meets including the Paralympic trials where she landed a spot on the 2016 Paralympic Team.

To date, Reg’s swimmers have accumulated 3 World Records, 5 Canadian Records, 24 Canadian Age Group Records, 32 Ontario Age Group Records and 2 Canadian University National Champions. He has been recognized for his coaching excellence and has been awarded numerous honours, including: the 2012 Ontario Coach of the Year from the Ontario Coaching Association, the 2012 Swimming Canada Para Swimming Coach of the Year from the Coaching Association of Canada, and received the Queen Elizabeth II Diamond Jubilee Metal. On September 13, 2019, he was inducted into the Ontario Aquatic Hall of Fame.

In recognition for his contribution as a coach to the sport of Swimming, we are proud to welcome Reginald Chappell as part of the 2019 class of inductees into the Aurora Sports Hall of Fame.