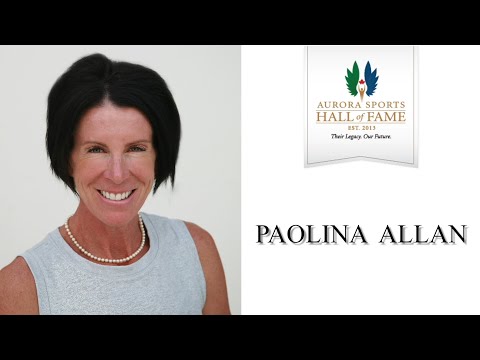 Paolina Allan was born in Toronto in 1970. At the age of 7 she moved with family to live in Scotland. Growing up she was always sporty. She was not interested in team sports preferring instead independent running, cycling, and gymnastics. After returning to Canada at age 20 she cycled everywhere she went. As she did not get her driver’s licence until age 35.

It was at age 30 after watching the Ironman World Championship on TV that her career as a triathlete began. She saw the father-son Team Hoyt competing and was inspired to race, saying to herself “I want to do that.” In her first race after 1999 she came 4th in her age group.

“I was not an athlete. I worked immensely at my training” -Paolina Allan

Paolina was supported in her triathlon career by a great network of people at the Aurora Triathlon Team. She was pushed hard by the competitiveness of the 250 members. Not a strong swimmer she was able to develop as a swimmer under her coaches Adam and Nancy. She also swam with fellow Aurora Sports Hall of Famer Dan Thompson.
Paolina also took part in the local cycling community with the Newmarket Eagles Cycling Club. A community she is still involved with as a board member and founder/coach of the group’s all women’s branch the eGALS.

In 2005, Paolina got her pro licence and was able to race professionally. In her first year she came second in the Ironman Canada Triathlon. In her career she qualified for the Ironman World Championship in Hawaii three times and ran in 2008 and 2009. In 2009 she was made Female Canadian Triathlete of the Year, the same year as Olympian Simon Whitfield won the Male Canadian Triathlete of the Year. She has won the Recharge with Milk Triathlon Pro Elite twice. And has broken two course records in the Peterborough Half Ironman, coming first both times.

After triathlon Polina moved towards a road cycling career. She was a strong cyclist in triathlon and always outperformed in that leg of the races. It was here again that she competed alongside Olympians, this time on a pro-woman’s team with Sue Palmer who as been to the Olympics twice for cycling. In 2014, she had a string of first place finishes for cycling, including a win at the Kitchener-Waterloo Road Race and three Centurion Cycling victories.

Still involved in the sporting community she now works as a coach. Paolina works with Multisport Triathlon teaching future competitors and launching their racing careers. Paolina’s pay-it-forward attitude includes many of the things that she raced with herself. Shoes, clothing, bikes, and helmets she passes along to people just starting out in triathlon and cycling.

Paolina’s fantastic work ethic, her desire for the podium, and constant challenging of herself have made her a champion. Paolina proves the old maxim that you can do whatever you put your mind to, as she did after seeing triathlon on TV for the first time. We are very proud to add another strong woman, and first triathlete, to the Aurora Sports Hall of Fame.