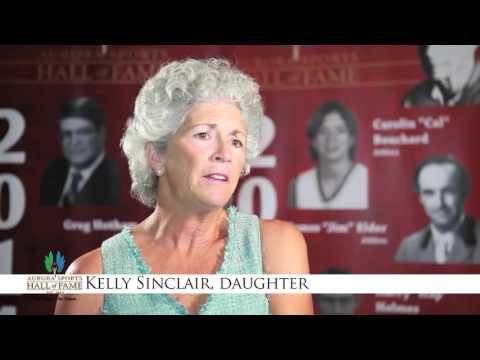 Kenneth Donald Sinclair, born in Toronto on January 14th, 1930 is recognized as a builder and contributor in the sport of Tennis in Aurora and Canada and as being an exceptional volunteer, entrepreneur, business man and visionary. Ken and wife Betty were married on Sept. 20, 1952 and they have seven grandchildren, ages 24 to 27 and two great-grandchildren.

Ken became a member of the Toronto Cricket, Skating & Curling Club in 1958 and he began playing league tennis. Ken volunteered his time and energy to contribute to the sport of tennis because he was not only a visionary, but knew how to follow through and make his plans and dreams a reality.

Ken became interested in tennis in his late 20’s and he stepped up onto the international scene with a drive to win and he attended championships all over the world.

As a tennis player, Ken was a ten-time Canadian Open Singles Tennis Champion, five-time Canadian Open Doubles Tennis Champion for over 45’s. In 1985, Ken won the European Indoor open Singles and Doubles Championship for over 55’s and did not stop there. He won the Crawford Cup for the over 70 World Championship for Singles and Doubles in Cape Town in 2000, but more importantly, he passed on his love for the sport to others.

Ken and Ralph Ander brought together partners to finance and bring the first tennis bubble to Canada, after seeing them in Sweden. The bubble was erected in 1968 at the Toronto Cricket, Skating & Curling Club. Ken raised money and supporters to fund it, with the understanding that if the enterprise proved to be successful at the end of the season, the club would pay for it and take it over. When this venture indeed proved to be successful, tennis bubbles began to spring up all over Canada. Ken served on the board of the club from 1971 to 1975, serving as President in 1973 and 1974.

For 35 years Ken was involved with the Ontario Tennis Association, chairing many tennis events. He brought Provincial and National Tennis Championships to the Toronto Cricket, Skating & Curling Club and he was instrumental in the success of the Canadian Open, now the Rogers Cup, working tirelessly as chairman from 1969 – 1983.

At first, the Canadian Open alternated between venues, Cricket Club and the Toronto Lawn Tennis club until Ken initiated the building and negotiation of a long term lease with the York University as a representative of the Ontario Tennis Association and Tennis Canada. Ken’s dream was to have a Tennis venue that would attract international professional players and further the growing sport in Canada. The Canadian Open moved to York University’s one million dollar Rexall stadium in 1976.

In 1985 Ken chaired the tennis component of the Master Games.

Ken founded and built what was then known as Timberlane Tennis and Country Club. Ken and his wife, Betty moved to Aurora in 1985 while the club was being built. Timberlane Athletic Club opened in 1987 and became the venue for many provincial and international tennis events over the years.

Ken initiated the Jarry Park tennis facility in Montreal. Ken co-founded and operated a tennis academy in London, Ontario. The All Canadian Academy trained elite junior players, some of which went on to achieve great things. At both Timberlane and The All-Canadian Academy facilities Sinclair hired long-time friend Lorne Main as a teaching professional.

Ken and his tennis partner, Lorne Main are still the holders of more international championships than any other Canadian, not only in tennis, but in any other sport.

With Betty’s unfailing support, the encouragement from his father, Donald, and the friendship of his tennis partner Lorne Main, Ken has enjoyed many years of joy and fulfillment not only as an athlete, but as someone who helped to shape the face of tennis in Canada. In 1989 he was given Honorary Life Membership to the Toronto Cricket, Skating & Curling club in appreciation for his outstanding service to the club and was inducted to their “Tennis Wall of Fame” in 2001.

In recognition of his contribution as a builder in the Sport of Tennis, Ken was accepted into Canada’s Tennis Hall of Fame in 1996 and received the Ontario Tennis Association’s Distinguished Service award in 2003. In May, 2007 a tribute dinner was held at the Toronto Cricket, Skating & Curling club in honour of long time tennis partners Lorne Main and Ken Sinclair.