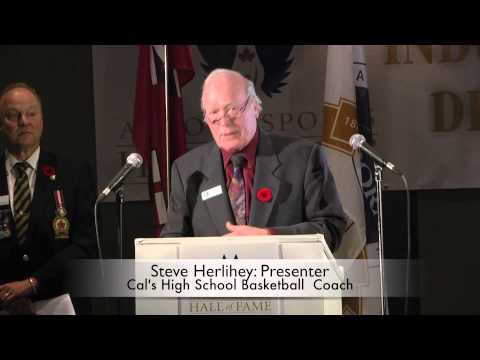 Carolin “Cal” Bouchard grew up in Aurora and attended Aurora High School from 1991-1996 and during that time launched a remarkable career in basketball that has never been duplicated by an Auroran.

While at Aurora High she was a York Region Secondary School Athletic champion in badminton, golf and of course her sport passion; basketball. She captained the Golden Eagles Girls Basketball team, was a Toronto Star Basketball First Team All-Star, and was a five-year Honour-Roll student, co-valedictorian of her graduating class and a Governor General’s Academic Medal winner. She also represented Aurora proudly on Ontario Basketball Association teams winning numerous medals and individual honours. She played for Team Ontario for three years and captained the team in 1994 and 1995, being selected Championship MVP at the 1996 National Finals.

From 1997 to 2003 Cal was a member of the Canadian Women’s Basketball Team, playing 81 games world-wide and captained the team to a Pan Am Silver Medal performance in 1999. She co-captained the 2000 Olympic team and played on the 2003 Pan-Am team and 2003 Olympic Qualifier team.

Cal Bouchard was the first Canadian to be drafted by the Women’s National Basketball Association and in 2001-2002 she played professional basketball in Europe and selected to the All-Star Team in the Spanish Women’s League.

In November 2006 she was Inducted into the Boston College Sports Hall of Fame. In 2013, the Aurora Sports Hall of Fame is proud to Induct her into our Inaugural Class for the leadership she has shown on and off the court and for representing the Town of Aurora proudly throughout her basketball career and life.