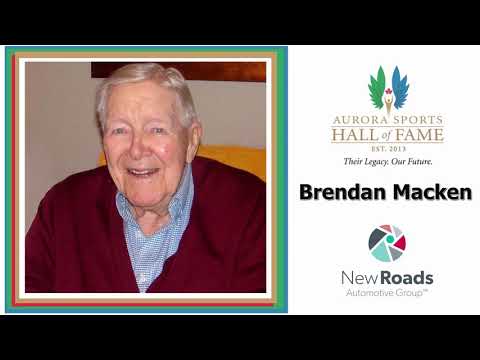 Brendan Hubert Macken was born on January 21, 1923, and raised in Montréal, Quebec. He was the son of two accomplished tennis players from Dublin, Ireland who had a myriad of trophies between them before marriage brought them to Canada. Brendan suffered through health issues in his early childhood including scarlet fever, quinsy, and rheumatic fever but that did not stop him from going on to become an accomplished tennis player with many accolades garnered over his extensive professional career.

Macken, like many Canadian boys, played hockey as a child; but with his tennis parents, he and his siblings began learning the sport at a young age. It was at the age of 14 he began learning tennis more formally on the Westmount public courts which led him to ultimately joining the Mount Royal Tennis Club. Playing from the early days with his sister Patricia and brother Jim, one could tell this family of tennis enthusiasts really loved the game. Brendan and Jim competed against and with each other on many courts over their professional careers.

Brendan’s time at the College of William & Mary in Williamsburg, VA was a turning point in not only his tennis life but personal as well. Enrolling in 1945 after being scouted through his win at the Toronto Cricket Club in 1944, his years at William & Mary were filled with tennis and romance. It was there that he met his then sweetheart Elizabeth who he would go on to marry and with whom he would celebrate over 66 years of marriage. Prior to their formal engagement when they were still in the dating stage, the Montréal Gazette inaccurately called Elizabeth his fiancé, a rumour that made it to both of their families and became a fun family story. Together they had five children: four daughters (Nancy, Virginia, Margaret, and Helen) and one son (Brendan Jr.).

Professionally, Brendan’s college life turned the tide towards competitive play. While singles and doubles tournaments were part of his repertoire from the earliest part of his professional career, his accomplishments as part of the Davis Cup team certainly stand out, playing from 1946-1952, with ties and wins throughout the years.

Equally impressive was his significant title win in 1950 when he took the Canadian Open men’s singles trophy which he added to his doubles crowns won in 1946 and 1951.

In 1968, Brendan joined the Gordon Trophy team for players over the age of 45 and served as Canadian captain for 11 years.

He advocated for the sport as a lifelong commitment with awards only secondary to the love of the game. In fact, one early award he won was a fishing rod which is significantly different compared to some of the payouts that modern players get. Brendan truly believed in playing for playing – but his competitive spirit was always present: he always played to win.

“In my day you played tennis for the love of tennis not for the money.”

Brendan developed a lifelong loyalty to the brand of Slazenger as it was the first company to offer him a sponsorship deal. He preferred the older wooden model and used the rackets in both practice and tournament play. He eventually did move on to the modern style of racket, but his fondness for the older model did not fade.

With many awards over his decades–long professional and for–pleasure tennis career, it was not surprising that Brendan was one of the inaugural inductees into the Tennis Canada Hall of Fame in 1991.

Moving to York Region in 1966, Macken supported his family by the operation of an industrial cleaning supply company. Later settling down in Aurora in 2010, he continued to play tennis well into his 80s, only stopping when arthritis in his hands made it difficult to play.

Not too long after celebrating his 97th birthday, on March 12, 2020 Brendan Macken passed away. He leaves behind his daughters, grandchildren, great-grandchildren and a long legacy of professional tennis accolades. He will be missed but not be forgotten.

In recognition of his contribution to the sport of Tennis, we are proud to welcome Brendan Macken as part of the 2021 class of inductees into the Aurora Sports Hall of Fame.