Back to the blog
ASHoF receives honoured visit by Minister of State April 14, 2015

On Monday March 16th, the Honourable Minister of State (Sport) toured the Aurora Sports Hall of Fame as part of a two-person delegation that visited some of the Town of Aurora properties in celebration of the Year of Sport in Aurora. Mr. Bal Gosal accompanied Member of Parliament (and sports fan) Lois Brown during this historic event.

Before Al Downey (Director of Parks & Recreation Services) escorted the guests on a short tour of the newly renovated Aurora Family Leisure Complex (AFLC), Aurora Mayor Geoff Dawe spoke about the Year of Sport in Aurora and the measures that the town has taken and will take to ensure that Sport be properly supported during this year and beyond.

After leaving the AFLC, Mr. Gosal and Mrs. Brown were ushered into ‘the Hall’, where Board of Governor Michael Roy and Honoured Member Bruce Stafford showcased the Hall and addressed the importance of its sustainability. In a touching moment, Mr. Stafford presented the honoured guests with a commemorative certificate.

Immediately following the tour, the invitees, Mayor Dawe, and councillors, sport leaders and various stakeholders attended a round table discussion regarding the Federal Government’s role in municipal sports, specifically Sport in Aurora. Mr. Gosal and Mrs. Brown fielded questions and provided input as to how the Town can create strategies and garner support in its quest to become the Most Fit Town in the Country.

Both guests left with gifts from the Town and a commemorative Aurora Sports Hall of Fame jacket, which Mrs. Brown suggested she would wear proudly while working out! Mr. Gosal was invited to attend the Town’s Sport Heritage Pan Am Games display that will be featured at the Aurora Cultural Centre starting in June. 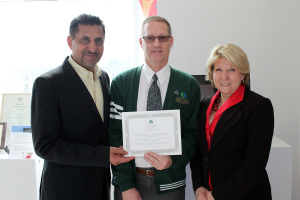