Mayor Geoffrey Dawe presented the much sought after Aurora Sports Hall of Fame commemorative sweater to Honoured Member Frank Stronach. Mr. Stronach’s admission into the Hall was held in November of 2013, during the Inaugural Induction Dinner Celebration of the Hall of Fame.

Inducted in the Builder/Contributor category, the entire community is surely aware and grateful for the huge impact that Mr. Stronach has had behind the scenes and indirectly in the landscape of this community, as evidenced by his contributions to sport in the Town of Aurora. From soccer fields to pools, rinks to equestrian facilities, Frank Stronach has enabled thousands of athletes to enjoy, participate and excel at their chosen sport at multiple levels. One of the most visible areas of his support has come in the form of the Magna Hoedown, which has benefited local organizations – many of them sport groups.

The Aurora Sports Hall of Fame is proud of the 13 Honoured Members currently in the Hall and look forward to inducting more during the 2015 Induction Dinner Celebration that will be held in November. The annually held dinner praises excellence in sports in Aurora by Athletes, Coaches and/or Builder/Contributors and is now in its third year. The Induction of the 2015 slate will be announced in June. 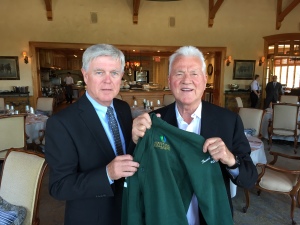 In related news, TSN Sports Personality James Duthie has agreed to be the Master of Ceremony again as the Hall moves its celebration dinner to the prestigious St. Andrew’s College in November. More information including ticket information will be forthcoming.