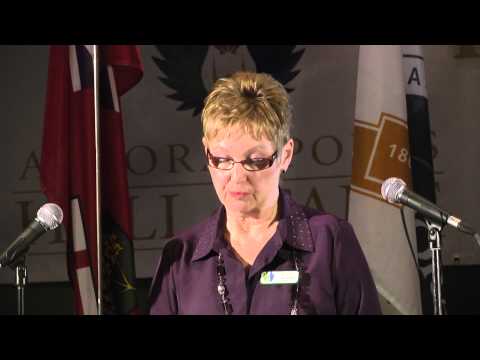 Norm Stunden was born October 24, 1929 and became a resident of Aurora in 1952 when he married his wife, Shirley Holman in June of that year.

Norm was always an exceptional athlete in both hockey and softball and was on the 1952 Aurora Softball League Championship Team.

As this group of Diggers “matured” Coach Stunden continued to coach these young ladies, now called the Senior Diggers, until their final year in 1983. He continued to coach in the Aurora Women’s Softball League after, until he retired on a winning note in 1990 with a League Championship, completing a 38 year history of coaching and community service in Aurora.

A tribute to Coach Stunden’s contribution is that the Aurora Diggers continued to be in close contact with Norm and his family until his passing on September 23rd, 2012.

The Aurora Diggers Girls Softball Association continues to operate in Aurora bringing Norm Stunden’s love of the game to Aurora girls and their families. His coaching legacy remains for others to follow.

Norm Stunden’s energy, enthusiasm and determination on and off the field and the positive effect he had on his players, their families and friends over his long coaching career is forever enduring and we are proud to have him as a Member of the Inaugural class of Inductees to the Aurora Sports Hall of Fame.