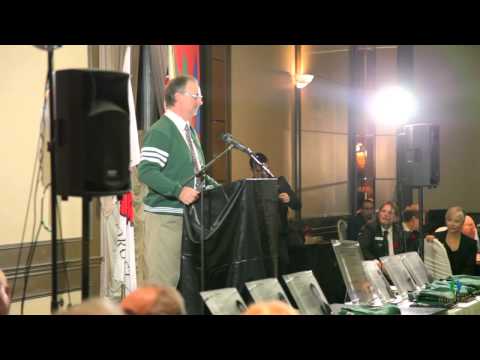 Greg Hotham was born in London, Ontario on March 7, 1956 but moved with his family to Aurora before he started his hockey career; a career that has been judged as exceptional by all hockey standards. He is truly a product of Aurora and his record stands as an outstanding example of hockey achievement in this Community.

Greg made his first mark in Aurora as a member of the 1967 All-Ontario Championship Pee Wee team. He went on to play within the system and ultimately played for the Jr “A” Aurora Tigers. During his late teens, he attended St Andrew’s College and played for the Saints for two years developing into a highly skilled offensive-minded defenseman. His talent did not go unnoticed and he was drafted by the Toronto Marlies of the OHL, then traded to the Kingston Canadians; playing almost two years with that franchise and scoring 57 points in 80 games.

Greg Hotham began his professional career in 1976 after being drafted by the Toronto Maple Leafs and then played with their International Hockey League farm-team, the Saginaw Gears, winning the Turner Cup in his first year with Saginaw. After an impressive second year with Saginaw, he was called up to the Leafs top farm-team, the Moncton Hawks, coached by Eddie Johnston. From 1979 through 1982 Greg was called up to the Maple Leafs numerous times, but part-way during the ’82 season, his Moncton Coach, Eddie Johnston, who was now the head coach of the Pittsburgh Penguins traded for him and he enjoyed his most productive years in the NHL with that franchise.

Greg rounded out his professional career by playing “back home” when the Toronto Maple Leafs moved their AHL affiliate team to Newmarket. He played for four years with the Newmarket Saints before retiring at the conclusion of the 1989-90 season. He continued to coach his two sons Scott & Andrew, who have gone on to play professionally in Europe.

Greg Hotham’s NHL record speaks for itself, playing in 230 NHL games spanning from 1979 – 1985 amassing 89 points and in 2014 the Aurora Sports Hall of Fame is proud to induct him in the Athlete Category.