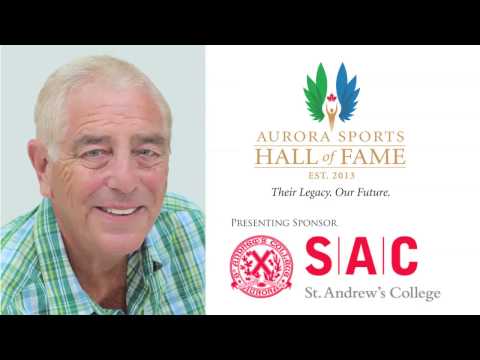 Alan Robert Dean was born in Birkenhead England on July 27th, 1939. He arrived in Canada in 1965, and immediately joined the Aurora Soccer Club. Alan Dean coached in the Aurora Minor Soccer system, the forerunner of the Aurora Youth Soccer Club. After his soccer career ended in serious injury in 1974, he still continued to coach Soccer until 1984 and served as a member of the Aurora Soccer Club Executive from 1965 until 2002, five of those years as President. From 1966 until 1984 he was on the Board of Directors of the Newmarket and District Soccer Association.

The soccer accident in 1974 resulted in Alan Dean losing his leg below the knee and as a result he became involved with sports for Athletes with Disabilities. Alan Dean worked at Collis leather factory in Aurora for 23 years until it closed, then he turned his attention towards sports administration. He was advised to consider enrolling at the Durham College Sports Administration program, but they invited him to join the two year post-graduate program. This involved teaching, giving presentations, as well as working with sports professors. One of his placements was at Dr. Jackson’s Sports Medicine Clinic in College Park in Toronto. Dr. Robert Jackson, who was a pioneer in arthroscopic surgery and the Chair of the Canadian Wheelchair Sports Association, invited him to teach the staff about sport for people with disabilities.

Alan was an athlete in the 1976 Ontario and Canadian Games for the Physically Disabled, and won six medals at the National Championships that year and he was able to use his knowledge as an athlete and an amputee to help establish sports for athletes with disabilities in Ontario and Canada. In 1976 he was a founding member and board member of the committee for Ontario Amputee Sports Association and Alan has been founding member and Director of the Canadian Amputee Sports Association since its inception in 1977. He became Chair of its Sport Technical Committee using his skills to regulate and classify the athletes. Alan still serves as President of both the provincial and national amputee sports associations.

Alan was co-chair with late Councillor Norm Stewart to bring a Soccer team and Seniors Group from Leksand, the town’s twin city. Alan received the Town of Aurora Civic award in 1979.

In 1980 Alan was the Ontario delegate to the Co-ordination Committee that founded the Canadian Federation of Sports Organizations for the Disabled, (CFSOD) now the Canadian Paralympic Committee. Alan has also been a delegate for ParaSport Ontario since 1981.

Alan contributed in many ways behind the scenes as an advocate for sports for both able- bodied athletes as well as those with disabilities. Alan was a member of the Leisure Services Advisory Committee and later the Accessibility Advisory committee during the 1990’s. Alan was a member of the Management Committee which was responsible for the successful amalgamation of International Sports Organization for the Disabled (ISOD) and the International Stroke Mandeville Wheelchair Sports Federation (ISMWSF), from 2000 to 2003. Their mandate was to form the International Wheelchair and Amputee Sports Federation, or IWAS, which took place in Christchurch, New Zealand in 2003. Alan continued to serve on the IWAS board as a member at large until 2005.

Alan has been a Director of Ontario Amputee and Les Autres Sports Association since 1982 and among other responsibilities has represented the organization at the Games Council and Board Member of ParaSport Ontario (formerly named Paralympics Ontario and Sport for Disabled Ontario).  From 1982 to 1995 he was a member of the board of Directors of CFSOD and Canadian Paralympic Committee. Alan found fulfillment in inspiring other amputees to get involved in sport by volunteering at the West Park Hospital. He has volunteered there since 1987 in gratitude for their help in his own rehabilitation.

In 2013 Alan was a member of the team that oversaw the formation of Para-Athletics Ontario which will be responsible for the sport of Athletics for all classes of athletes with disabilities in Ontario.

Alan Dean was made an Honorary Life Member of the Aurora Soccer Club in 2003. Alan Dean has been the President of Aurora Lawn Bowling Club since 2002. Alan attended the Canadian Lawn Bowls Championships as Ontario Team Manager in Edmonton in 2010, in Toronto in 2011, in Vancouver in 2013 and in North York, Ontario in 2015. In 2012 he was elected President of the Ontario Lawn Bowls Association for a two-year term, and has been Director of Bowls Canada since 2014.

In 1992 Alan Dean was awarded the Canadian 125 Anniversary Medal and the Queen’s Golden Jubilee medal in 2002. He was inducted into the Canadian Disability Hall of Fame in 2010.

We welcome builder and contributor, Alan Dean, as a member of the 2015 class of inductees to the Aurora Sports Hall of Fame.