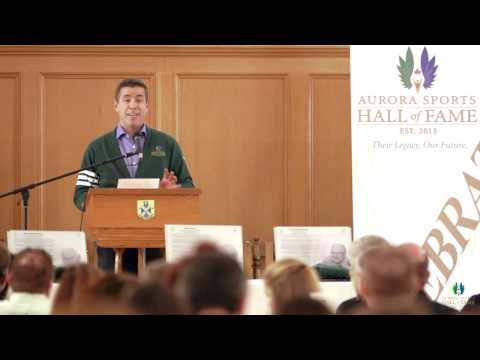 Aurora resident, Mark Heese was born on August 15, 1969 in Toronto. Mark and his wife, Janet Law were married in 1998 and they have four children.

Mark’s father, Frederick Heese, was an Olympic canoeist and the youngest participant for Canada, ranking 7th at the 1964 Tokyo Summer Olympic Games. Mark watched him train hard and this inspired Mark to do the same. While growing up, Mark always had the dream to become an Olympic athlete. Though he wasn’t a volleyball player, he participated in many other sports in High School, including soccer, hockey, cross-country running and skiing, baseball, with basketball being his favourite sport.

In 1988, at the age of 19, Mark went off to McMaster University intending to play basketball. He tried out for the indoor volleyball as well as the basketball team. He made the indoor volleyball team and played for the Marauders for four years, and by his fourth year, they were ranked third in the country and he was captain of the team. After Mark graduated, he continued to play club indoor volleyball up until 1995 until qualifying for the Olympics when he turned his focus toward beach volleyball.

Mark’s interest in beach volleyball began when he lived with his father in “the Beaches” in Toronto, he was a member of the Balmy Beach Canoe Club where he spent many hours paddling as a competitive canoeist, but he was distracted by the beach volleyball courts nearby. Mark paddled until age 18 and then moved on to volleyball.

At nineteen years of age, Mark saw three of the best players come down to the beach to play volleyball and he offered to make up the 4th player. At first they said, “No,” but Mark was persistent and tried again the next day when they again needed a 4th player. Finally he was invited to play, not knowing that the person who was missing from the game was none other than, John May, who was held up in meetings creating the first Labatt Pro Beach Tour. John May would later become one of his Olympic coaches. Mark played with them for two weeks that summer. The following year, Fred Koops, who had seen Mark play in Waterloo, invited him to join the summer tour, Mark played on the tour from 1989 to 1991. The tour expanded and Mark eventually moved up into partnerships in 1991. He was 21 years of age when he reached the finals in the National Championships. By 1992 he was representing Canada at international Tournaments.

In 1994 Beach Volleyball was named an Olympic sport and so Mark put his career as a high -school Phys Ed teacher on hold to pursue the Olympic Dream.

Mark is a three-time Olympian participating in the Sydney and Athens Games and at the inaugural beach volleyball event at the 1996 Summer Olympics in Atlanta where Mark Heese and John Child brought home a bronze medal for Canada.

In 2005 he was awarded the Most Inspirational Player Award as voted by his peers while on tour.

With the support of his wife and family, his Olympic coaches, John May and Hernan Humana, he enjoyed a 16 year Volleyball career as an athlete and now devotes his time and energy to the sport of volleyball in other ways, closer to home.

Mark was one of the three coaches that assisted in gaining Canada’s first Gold medal at the 2010 FIVB Junior World Championships held in Turkey. He was the Beach Volleyball Analyst for the 2012 Canadian Olympic Trials and the 2012 London Olympic Games with RJ Broadhead. Mark was the Beach Volleyball Analyst for 2014 Sherbrooke Canada Games with Vic Rauter and for the 2015 Toronto Pan-Am Games for CBC.

He is an active member of the Storm Volleyball organization here in Aurora as a coach and has made guest appearances with other teams.

In 2015, we welcome Olympic athlete, Mark Heese to the Aurora Sports Hall of Fame in the Athlete Category.