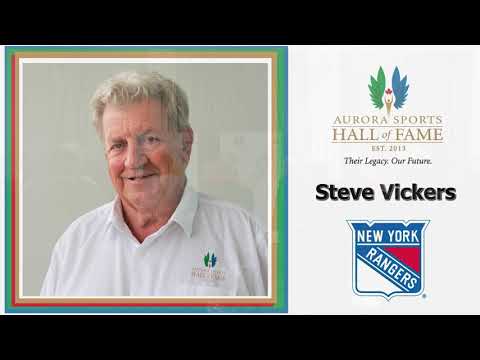 Born in Toronto in 1951, Steve was enrolled into hockey by his parents as a way to socialize and make friends. He struggled in his first year but found his footing mid-way through his second, which led to him moving up through the junior leagues.

In the 1968-69 season of the Ontario Junior Hockey League, Steve played with the Markham Seal-a-Wax “Waxers” who dominated the league championship and won the Sutherland Cup. Steve followed his time in Markham with two years on the Toronto Marlboros, scoring an amazing 43 goals in his final year.

Steve’s esteemed NHL career began when he was drafted in 1972 into the New York Rangers, the team with which he would spend his entire professional career. Before his official start with the team, he was invited to practice with them in preparation for the Stanley Cup playoffs. Once on the Rangers as a true NHL Rookie, Steve developed an on-ice rapport with fellow forwards Walt Tkachuk and Bill Fairbairn, forming a renowned trio known as the Bulldog Line and netting himself 30 goals and 23 assists. He also earned the nickname “Sarge” for an old army jacket he would wear to practice.

In November of his rookie year Steve made NHL history, scoring hat tricks in consecutive games – the first rookie as well as Ranger to do so. The first night of this feat is memorialized at Madison Square Garden as the November 12th entry for their Garden366 series of photos.

Steve’s accomplished first season is best remembered for him winning the coveted Calder Memorial Trophy for Rookie of the Year, 1973. Hockey press at the time observed his stellar performance during the season and speculated about him bringing the trophy back to the Rangers for the first time in almost 20 years.

Steve continued his success with the Rangers, earning 58, 89, and 83 points the next three years, securing a spot on the NHL All-Star Second Team for the 1974-75 season. Steve also played two years on the Campbell Conference team in the NHL All-Star games in 1975 and 1976.

During this period, he enjoyed a streak of 165 games played before a back injury delayed his debut in the 76-77 season. Continuing his string of high-scoring years, his following four seasons had him earning 53, 63, 47, and 62 points.

February 18, 1976, Steve set a new Rangers record that remains to this day by earning seven points in one night: scoring a hat trick and making four assists at Madison Square Garden against the Washington Capitals.

Beyond his celebrated rookie hat-trick duo, his single-game point record and Calder Trophy win, Steve held several annual records with the Rangers, including Goals leader, Assists leader, Power Play Goals Leader, and twice Playoffs Points Leader. His goal against Atlanta in the 1980 playoffs at 33 seconds into Overtime remains the fastest Playoff OT goal in Rangers history. In 2009, the book “100 Ranger Greats” rightfully included Steve as #18 in their countdown.

After playing his final NHL game in April of 1982, he finished his contract by overseeing the New York Rangers Alumni Association, with which he has maintained a close relationship since. The next year he founded the annual New York Rangers Golf Outing, which continues to be a popular fundraising event for the team’s alumni.

Steve had begun taking insurance sales courses in 1978 and was primed to start a new career once his days on the ice were over. He moved to Aurora in 1987, and with his wife Joanna raised their three children here. He enjoys spending winters in Florida, and in 2010 became a grandfather.

In recognition of his storied professional hockey career, we are proud to welcome Steve Vickers as part of the 2021 inductees into the Aurora Sports Hall of Fame.