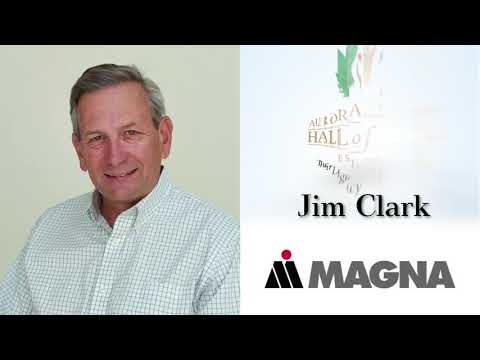 James “Jim” Frederick Clark was born in Midland, Ontario on April 21, 1957. One of his earliest memories of golf is truly out of this world. When he was twelve years old in July 1969, and the world was glued to the television watching the Apollo 11 mission, Jim and his father stepped out for some air and played an evening round of golf at the Midland Golf and Country Club. As the sun was setting, they stared up at the glowing moon in amazement, and disbelief, that there were humans that had earlier that day landed on its surface. Like the rest of the world, the Clark family got up in the middle of the night to witness Neil Armstrong’s historic first step.

Jim never considered himself to be an avid, or a very skilled golfer, but he was always a fan of the PGA Tour and the sport of Curling. In 1976, he was part of the Curling Team that won the Ontario Colts Championship. In 2002, that team was inducted into the Midland Ontario Sports Hall of Fame. Little did Jim know that his love of curling would bring him closer to the PGA Tour action.

After University, Jim moved to Toronto to work in the computer industry and would often attend the Canadian Open at Glen Abbey as a fan. One day, while curling, Jim met a man by the name of Brian Petrie who was wearing a Canadian Open Committee shirt. Brian invited Jim to volunteer at the upcoming Canadian Open, but due to scheduling conflicts, Jim had to decline. In 1984, a couple years after meeting Brian, Jim was in the midst of changing jobs and the Canadian Open just happened to be taking place during the transitional week that he was off work. He decided to take up Brian’s invitation and the rest is history, in fact, he hasn’t missed being involved in a Canadian Open since.

“I loved every part of the professional golf world, the behind the scenes, the event management, and the sport. The challenges and crises were so much different from my real job because it was happening instantly. I would go from being the president of a computer company with 25 employees to being in charge of 1500 volunteers!”
– Jim Clark

A major inspiration throughout Jim’s volunteering career has been “Mr. Canadian Open,” Dick Grimm who was a leader in the Canadian golf scene for over forty years. He was a generation and a half older than Jim, but he took a liking to him and Mr. Grimm’s leadership, encouragement and mentorship had a lasting effect on Jim. Mr. Grimm always stressed to Jim to look after and acknowledge the volunteers. Jim has tried to uphold this message with the thousands of volunteers that have stepped up to help with all of the events that he has chaired.

In 1988, Jim and his young family moved to Aurora because they liked the community and had a few friends who already called Aurora home. From 1993-2000, his children played soccer with the Aurora Youth Soccer Club and Jim helped coach all of their teams. He has also been an active volunteer with the Aurora United Church. In 2012, Jim married Sandy and is the proud father of Stuart, Ian and Heather, step-father of Morgan, and newly minted grandfather of Rory.

Throughout the course of his career, Jim has been the Tournament Chair of the Canadian Open eleven times. He was Tournament Chair for the 2001 and 2019 Canadian Women’s Open, the later which was held this past August in Aurora at the Magna Golf Club, and for the inaugural 2014 World Junior Girls Championships. He was the Sport Chair for Golf for both the 2015 Pan Am Games and the 2017 Invictus Games.

In 2001, for the first time in Royal Canadian Golf Association history, Jim was the first public player elected to the Board of Governors. He has remained on the Golf Canada Governor’s Council and has sat on the Professional Champions, Audit and Risk Management, the Heritage, Human Resources and Sport Committees. Jim always uses his expertise for the betterment of the sport and in 2016, he was awarded the Golf Canada Distinguished Service Award. In 2018, he was a finalist for the PGA Tour Volunteer of the Year Award.

Jim’s passion for all of the aspects that make up professional golf sets him apart. He never imagined that his involvement would span more than 35 years, and as the champion of volunteers, he has seen thousands of volunteers come and go.

In recognition of his contribution to the sport of Golf, we are proud to welcome James Frederick Clark as part of the 2019 class of inductees into the Aurora Sports Hall of Fame.