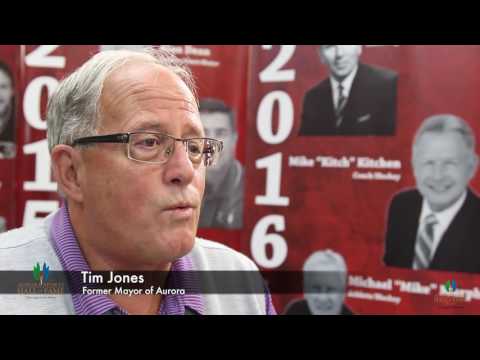 Michael Elwin Kitchen was born February 1, 1956 at Southlake Regional Centre in Newmarket. His love for ice hockey began as a boy skating with his friends on their backyard pond where they played until their feet were “beyond frozen”. As a player for the Schomberg Red Wings Club, he was part of three championship wins in Pee Wee, Bantam and Midget Hockey. At the age of fifteen, he was invited to play with the Aurora Tigers as one of the team’s two youngest players.

After leaving the small town of Schomberg to attend High School in the city of Toronto, Kitchen played Junior A with the Toronto Marlboros and won the Memorial cup in 1975. His National Hockey League (NHL) career began in 1976 playing for the Colorado Rockies and then the New Jersey Devils. As a player, he was hard-working, disciplined, fast and fierce.

“I had the great pleasure of first meeting Mike in 1998 when he was hired as an Assistant Coach of the St. Louis Blues and I was their Video Coach.  …He took so much pride in making our players better each and every day , whether it was on the ice , through a video session or just sitting down and talking with them about life and the demands of the NHL” – Jamie Kompon, General Manager & Head Coach for the Portland Winterhawks

Mike was Assistant Coach for the Blackhawks when they won the Stanley Cup in both 2013 & 2015. Undoubtedly these wins are among the highlights of his career and ‘Kitch’ has been with the Chicago Blackhawks since July 2010.

“During our years as coaches with the Toronto Maple Leafs, it was Mike’s astute handling of our defense-men and his defensive philosophies that made the Leafs one of the top teams in the League.” – Mike Murphy, Senior V.P., NHL Operations

Mike Kitchen believes in setting an example for his players in health and fitness and off the ice he encourages them to be the best person they can be. He loves teaching and finds it rewarding when a player takes skills learned in practice to the ice in a game. He attributes his strong work ethic to the life lessons his parents taught him – ‘always work hard and do your best’.

“We worked out at the same facility when Mike was in town. I always marveled at his dedication on the Stairmaster. But then I should have realized, because I used to watch Kitch skate the Leafs players after practice sometimes, and he could go with any of them.” – Lance Brown, Sports Director at CTV Toronto

Throughout his twenty-seven year coaching career, Mike still finds time to give back to the community through causes such as Southlake Regional Centre (SRC), Coboconk District Lions Club, Aurora Optimists, Children’s Wish Foundation and more.

“Mike has a burning passion for hockey, but also a very soft spot for Philanthropy…. Mike and his family have called Aurora their home for over 30 years, dating back to 1985. He is very proud of his Ontario roots and has always remained close to the community and many of the friends he and his family have been fortunate to grow close to over the years.” – Joel Quenneville, Head Coach, Chicago Blackhawks.

‘Kitch’ has survived the volatile world of Hockey Coaching with adaptability and unparalleled success. He has brought back The Stanley Cup to our local community to inspire young players and he has created many unforgettable moments for young patients at Southlake Regional Health Centre.

We are proud to welcome Mike ‘Kitch” Kitchen to the Aurora Sports Hall of Fame in the Coach category.