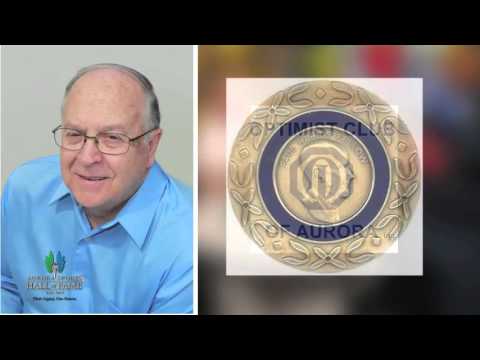 Long-time Aurora resident, Lowell McClenny was born on October 4th, 1940 in Toronto but spent almost all of his life in Aurora. Lowell and his wife, Carilyn were married on March 2nd, 1963. They have two sons, four grandchildren, and two great-grandchildren.

Lowell joined the Aurora Police Department on July 1st, 1965 as a police officer and worked his way up the ranks until January 1st, 1971 when York Region was born. He then joined the newly formed York Regional Police and on October 4th, 1999 he retired as Superintendent.

When his eldest son played recreational hockey and then Minor Hockey in Aurora, Lowell voiced his concerns about the coaching to the president of the Minor Hockey Association, who then in turn suggested Lowell run for election for the Executive to make positive changes. Lowell was elected Director of Aurora Minor Hockey for a year and President for the following nine years. He coached at all age levels for an overall involvement of 15 years. He was also an Executive Member of Aurora Minor Lacrosse as well as a coach and referee.

Aurora Cable was Aurora’s only cable provider at the time of its inception in 1969. Lowell was Aurora Cable T.V’s “Play by Play” announcer for Minor Hockey, Minor Soccer, Aurora Tigers, Jr.A games and the St. Andrews College Mc Pherson Tournament from the late 1970’s until the year 2000.

Lowell approached Steve Mitchell with the idea to start a sports program which became a reality when Sportsbeat aired in June 1982. Lowell’s co-hosts on Sportsbeat were Doug Judson, Gerry Jennings, Colin Graham and substitute co-host John Swarbrick. The first guest on the show was Steve Buffrey who was the sports reporter around town in those days, now reporting for the Toronto Sun.

Lowell was the Founder, Producer and Co-host on Aurora Cable Internet from 1982 until Rogers Cable purchased ACI in 2008. The show was geared towards promoting sport in Aurora. As the show gained popularity and their equipment improved, they were able to interview teams on location, beginning teams from The Optimist Club Recreation Hockey.

Sportsbeat promoted all sports in Aurora, but particularly helped get the ball rolling for rugby in Aurora, as well as indoor volleyball. Among the many local guests on the show were Jim Elder, Brian and Karen Stemmle and Alan Dean, as well as many other familiar faces in sports in the town of Aurora. The last guests to appear on the show were former owner of The Auroran, Ron Wallace and his wife. Ron’s wife, Patricia was also Lowell’s niece and so it was fitting that Ron and Patricia ended off the show.

Lowell’s motto in life is: “Everyone has a dream, and if you want to make that dream reality, then you have to work at it.”  This proved to be the recipe for success in his life.

In 1999 he received the Optimist Club of Aurora’s “Respect for Law” award for exceptional dedication to police work in the community. That same year, Lowell accepted the The Rotary Club’s International “Paul Harris Fellow” award. In 2005 he was awarded the YRP “Volunteer of the Year” award, in the Province of Ontario Volunteer Service award recognizing his 15 years of volunteerism.

In 2013 the Character Foundation of York Region recognized him for being nominated in the category of Citizen of Character as a senior in 2013. Lowell has served as Police Male Chorus Volunteer Supervisor since 1991 and still continues to do so.