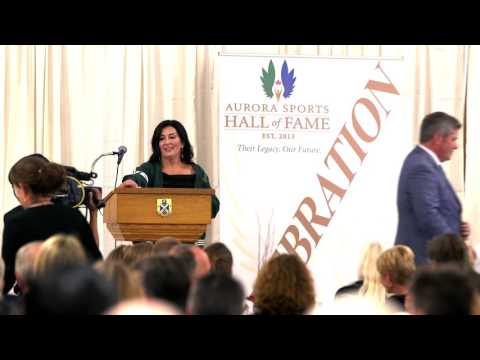 Karen Jean Stemmle could ski just about as soon as she could walk and was competing by the age of five. Born January 27th, 1964, she spent much of her childhood and school days in Aurora. During her time as a student at Aurora High School, she participated in figure skating competitions at the provincial level, until the age of seventeen when she put aside her skates to pursue Alpine Downhill Ski Racing.

Inspired by Olympic High Jumper, Greg Joy, and his Silver Medal win at the 1976 Summer Olympics in Montreal, she fostered the ‘Olympic dream’. In 1982, Karen, new to the Downhill racing scene, finished 4th at the Canadian Championships in Lake Louise where she was also awarded Junior Canadian Champion.

The Canadian Alpine Ski Team invited Karen to join them on the World Cup Ski Circuit and within a year, she finished 6th at a World Cup race in Mt. Tremblant. Quebec—the Olympic dream was within her grasp. She was greatly inspired by phenomenal ski legends Nancy Greene and Laurie Graham.

In 1984, a 4th place World Cup Downhill finish in Verbier, Switzerland qualified Karen for the Canadian Olympic team and she went on to march in the Opening Ceremonies at the 1984 Winter Olympics in Sarajevo. Karen was awarded 1 of 4 Canadian spots to compete and finished 21st in the race.

With her natural talent for downhill racing, paired with her self-discipline, her love for the sport and her determination to overcome challenges, she left her mark on the ski hills, reaching speeds of up to 140 kilometers per hour. With the support of her parents, brother and team mates, coupled with her zest for life, she represented Canada for five years. Her Ski training took her all over the world, including; Chile, Japan, New Zealand, Europe and Argentina.

“Karen always had a smile on her face… a laugh to keep everyone giggling. She had a very positive attitude. I don’t remember her ever being mad or causing drama.” – Liisa Savijarvi, National Ski Team teammate.

“I always looked up to my big sister. Karen inspired me to be a better ski racer; to work harder and most importantly, to do everything with a smile on my face.” – Brian Stemmle, Olympian and Honoured Member of the Aurora Sports Hall of Fame.

Since retiring as an athlete in 1988, Karen has continued to make a valued contribution to her most-loved sport by instructing at the Georgian peaks Club, where she learned to ski with her parents, and on other ski hills across North America – dedicated to helping skiers improve their skills and techniques.

Karen is a motivational speaker, volunteer and fundraiser whose talent, hard work and passion for her sport have inspired many others.

“The first feature story I ever wrote for any newspaper was on Karen. I had just gotten the job as sports editor at the Aurora Banner…  After that I followed her career…. After she retired she always contributed back to the community with fundraisers for various causes, which I found was admirable.” – Steve Buffery, Award Winning Sports Writer, Toronto Sun.

Karen met her husband, Julian Brandon in the summer of 1998 at team mate Liisa Savijarvi’s cottage on Lake Muskoka. As fate would have it, Julian was renting a cottage on Lake Rosseau with a bunch of Karen’s ski friends from Collingwood. Julian and Karen were married in 2002 and they have three children and a dog.

Liisa Savijarvi and Karen Stemmle have been life-long friends. Their fathers, who coincidentally share a birthday, flew to Sarajevo (in the former Yugoslavia) with the help of CTV to watch their daughters compete in their first Olympics. Together Karen and Liisa created a company called “Ski Escape” and ran it as a team for more than fifteen years, organizing adult and corporate ski events from Whistler to Newfoundland.

Recently, Karen was named the co-recipient of the Rob Thompson Memorial Award for her long-time dedication to the Danny Gallivan Cystic Fibrosis Golf Tournament.

We are delighted to welcome Karen Stemmle to the Aurora Sports Hall of Fame in the Athlete category.