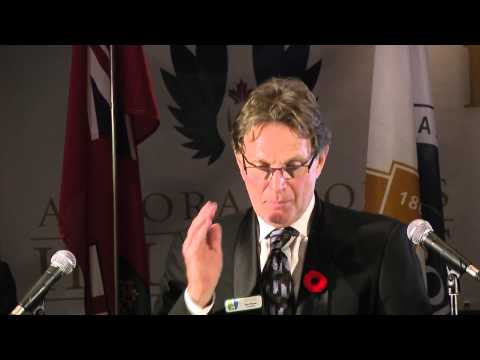 Harry “Hap” Holmes is the first professional hockey player ever to be born in Aurora.  Born on February 21st 1888, he lived on Centre Street in the heart of Aurora for a number of years before he and his family moved to Collingwood, Ontario.

Harry “Hap” Holmes became one of the preeminent goaltenders of his era, and excelled in all five of the top pro leagues from 1912 to 1928, playing 16 professional seasons and in 103 NHL games. In January 1918 he backstopped the Toronto Arena to a Stanley Cup in the inaugural NHL season. He not only made an impact in the National Hockey League but also the Pacific Coast Hockey Association, Western Canada Hockey League, Western Hockey League and National Hockey Association. He was considered a magnificent playoff performer and was on two Stanley Cup winning teams in Toronto and one each in Seattle and Victoria. He was the leading goalie six times in the Pacific Coast Hockey Association/Western Canada Hockey League.

Hap Holmes was considered an “heroic netminder” and In his honour, and since the 1948 season, the American Hockey League has named its top goaltending trophy the “Hap Holmes Memorial Award” for the goaltender with the lowest goals-against average.  Among others, it was won by Johnny Bower, Roger Crozier and Gerry Cheevers. When his playing days were done, Hap Holmes turned to coaching minor league hockey.

Hap Holmes died on June 27 1941 at the age of 53, having moved to Florida for his health. The Toronto Star headed its obituary “Star goalie of Seattle Nets obeys final call” with the sub-heading “Harry Holmes’ fine, clean career in sport ends this week.” The final paragraph of the reports reads “Few men connected with hockey over the years gave more to the game than the quiet-voiced Holmes.” He was posthumously elected to the Hockey Hall of Fame in 1972.

While Harry “Hap” Holmes may be forgotten by a “modern” hockey fan, usually because of the era in which he played, he should be remembered fondly by Aurora as a native son who played at the highest levels in Canada’s most prestigious sport. We are proud to Induct Harold “Hap” Holmes in the Inaugural class of the Aurora Sports Hall of Fame 2013.