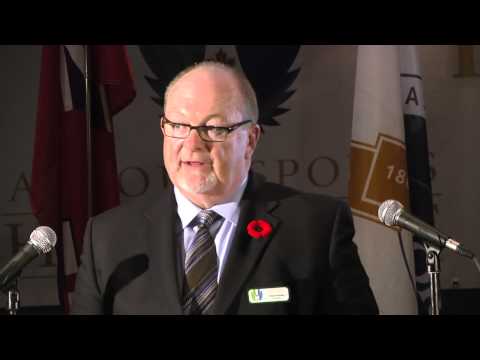 From parks and rinks to soccer fields and swimming pools, Frank Stronach has played an enormous role in promoting the growth and development of sports and recreation in the Town of Aurora. Through his financial contributions and strong support, he has helped to give thousands of residents the opportunity to play the sports they love and enjoy a wide range of recreational activities.

As the founder and former Chairman of Aurora-based Magna International Inc., Frank Stronach contributed millions of dollars in funding over the years to support the establishment of recreational facilities within the Town of Aurora, including the Aurora Family Leisure Complex and the state-of-the-art Stronach Aurora Recreation Complex.

His single greatest and lasting contribution was the creation of an annual fundraiser that brought together members of the community to raise funds for local charities and sports organizations. What started out as a small BBQ fundraiser at Frank Stronach’s family farm in the late 1980s would eventually become the annual Hoedown, one of York Region’s largest charity events and a community tradition that draws thousands of people each year. At the time of its 25th anniversary in 2013, The Hoedown had raised more than $7 million, with proceeds going to a large range of youth-oriented sports clubs. Much of the funding raised for these organizations was used to help children with special needs and children from disadvantaged homes.

A long-time resident of Aurora and lifelong sports enthusiast, Frank Stronach has created a lasting legacy of support for recreational activities and sports in his hometown. In 2012, he announced his intention to personally donate 83 acres of property next to his home to the Town of Aurora to create a unique eco-park. The recreational park is proposed to contain nature trails, an environmental education centre, wetland areas, an amphitheatre for student field trips and soccer fields.

In light of these and many other significant contributions over the years, the Aurora Sports Hall of Fame is proud to induct Frank Stronach as an inaugural member in 2013.