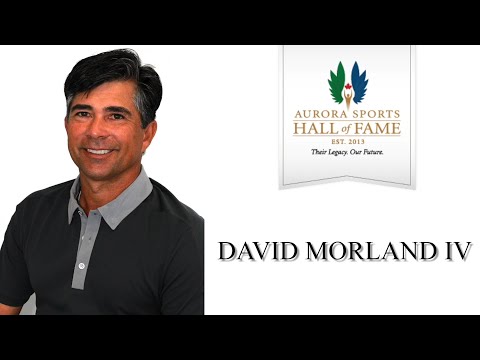 David Morland IV was born in North Bay, Ontario in 1969. The family soon moved to Toronto where David attended Church Street Public School. David played many sports in grade school. He tried everything from wrestling to skiing, but his two passions emerged as hockey and golf. By grade 10 he had to decide between his two passions. Seeing promise in golf, winning a 1986 and 1987 Ontario Golf Association championship, David chose to step off the ice for good.

In 1987 David was admitted with a golf scholarship to Kent State University in Ohio. The marketing student tied for 14th in his first university game at the 1987 West Point Invitational. He was also named All-American Honourable Mention in his first year. The next year he made 13th at the M.A.C. Championships and was runner-up for the Mid-American Invitational. In 1989 David placed 3rd at the West Point Intercollegiate and was the only golfer from Kent State to place at the Butler Invitational. In 1990 he placed 11th at the John Hancock All-American College Golf Classic. In his final year David was again named All-American Honourable Mention.

Every summer David returned to Aurora where his family lived from 1987 to 1994. In his first summer home he won the Ontario Men’s Better Ball Championship with his father (David Morland III). During his summers in Aurora he worked on the ground crews of local golf clubs. David would work from 6:00am to 3:00pm, take a quick nap, then practice at the course until nightfall.

After graduation in 1991 David turned pro on the 1992 Canadian Tour. That year he was named Canadian Tour Rookie of the Year. David then began traveling the world playing in various tournaments in Canada, Asia, South America, and the USA. He did this for about eight years before he made it to the PGA Tour in 2000. That year he finished 2nd for the PGA Tour’s qualifying school, one of his proudest moments. That season he finished 16th at the PGA finals. In 2001 he came 5th overall in the Canadian Open in Oakville. David played on the Web.com Tour winning at the Hibernia Southern Open and in 2003 at the Carolina Classic.

David was from a young age encouraged by his father, grandfather, and great-uncle who were all great amateur golfers. His grandfather (David Morland II) and his great-uncle were also both provincial champions. University coach Herb Page was also very influential on David. Coach Page in his scholarship offer to David recognized his potential to be a champion immediately. The two have remained in close contact ever since his graduation.

“The great thing about the game of golf is that it is like life. You play by the rules. You are genuine… treat people the way you want to be treated. And if you can give back, give back.” -David Morland IV

For his excellence in golf and ties to local courses we are proud to induct golfer David Morland IV into the Aurora Sports Hall of Fame.