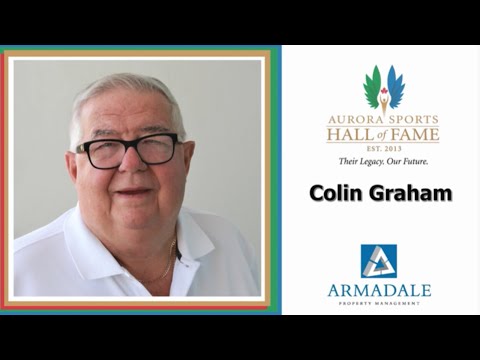 Colin Graham was born in Rudgwick, Sussex, England on October 30, 1944. Son of an English War Bride Pauline White, she and husband Frederick Graham moved to Canada in 1945. Colin did not play many league sports in his youth; however, sports did play a formative role for him. Into his adulthood, league sports became not only a passion, but an important part of his everyday life stemming mostly from his dedication to his kids. He has been married to his wife Bernadette for 56 years with whom he had three children: Jamie, Lynne, and Tracy.

As a coach and board member across multiple organizations, Colin was instrumental in starting and growing both women’s hockey and lacrosse in Aurora. Beginning his hockey coaching career in 1968 after friend Bob Little asked him for help, Colin took a short break, until his children’s growing involvement in league sports prompted him to take up coaching again in 1980. Hockey would take up a good portion of his coaching career. He had a generally laid-back approach to his coaching style. Making sure the kids were getting fair play time and having fun were always Colin’s priority. “Sometimes you have to make tough decisions, but the kids were always first.”

“If I could give one piece of advice to current and future coaches: Instill in the kids, sports is for sports – it’s played to have fun.”

Seeing kids out with lacrosse sticks throughout the Town, the community recognized the need to formalize lacrosse as there were no opportunities for scheduled or organized games. There were not enough volunteers for the committee, but with some convincing Colin joined the association which led to his serving nine years as president of the Aurora Minor Lacrosse Association (1983-1991). In his dedication to the sport and overcoming challenges of procuring provisions for the players, he purchased a 12-passenger vehicle so he could get players to events. Unfortunately, sustaining public interest in the association was difficult and it ended up folding with all equipment and nets being sent to Newmarket, which amalgamated the Aurora teams into that league.

Looking back at his legacy of years of tireless service to sports in Aurora, Colin places special emphasis on the two points where he won awards for coaching: the first was winning Coach of the Year in 1985 from the Aurora Minor Hockey Association, and the second in 2008 for Girls Hockey. These accolades held extra special importance to Colin: “I didn’t win anything individually, so it was great to win something for myself.” The competitions for these awards were significant and as they were voted on by peers (fellow coaches who he referred to as “pretty tough”) he felt the recognition held extra weight.

Partnering with fellow Aurora Sports Hall of Fame Inductee, Lowell McClenny (class of 2015), Colin co–hosted the local Sportsbeat Aurora television show which aired on Aurora Cable Internet from 1988-2008. Thinking back on his time with Lowell, Colin recalled with fondness the hours of debates they would have. By providing commentary and space for the teams of the area to be promoted and celebrated, Sportsbeat was an important part of sporting history in Aurora.

As a devoted Auroran who spent a good portion of 30 years living in the area, Colin strongly advocated and promoted sports. Closely associated with women’s hockey and part of the organizing board of bringing lacrosse to Aurora, Colin was and still is an important contributor to sporting in Aurora. His legacy continues as former players from decades ago still take the time to check in and say hello.

In recognition of his contribution to the sports of Hockey and Lacrosse, we are proud to welcome Colin Graham as part of the 2021 class of inductees into the Aurora Sports Hall of Fame.