Back to the blog
Aurora Sports Hall of Fame named Aurora’s Community Organization of the Year May 27, 2015

Outstanding community volunteers and organizations were honoured for their contributions to Aurora at the Town’s annual Community Recognition Awards. The Aurora Sports Hall of Fame (ASHoF) received one of the most prestigious awards by being proclaimed “Community Organization of the Year”.

This award is presented to a deserving group that has provided outstanding contribution, commitment and leadership to our community over the preceding year.

It was a big night for ASHoF as other members and volunteers also won awards including Hall of Famer Alex Ansell who was thanked for his 20+ of volunteering in the Community.

The Board of Governors is grateful to the numerous volunteers who work so hard to make the Aurora Sports Hall of Fame one of the best community Halls of Fame in the province.

For more information about the event, click on the following links: 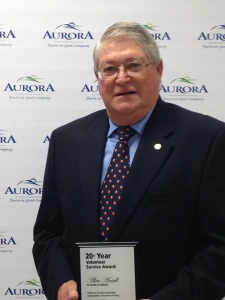